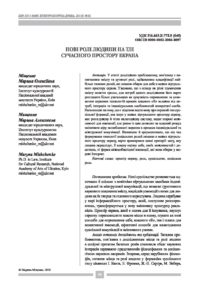 The aim of this paper is to analyze maintenance, essence and types of roles of a man formed within the limits of virtual screen space. These scientific searches seem actual as a role-play behaviour of a man in the real society and newly changed virtual reality differs substantially, that, in turn, influences on the evolution of modern culture and art processes of a modern state.
Results. The paper shows that the rich in the content constituent of virtual screen space formed exceptionally at the active voice of man effects on the processes of one’s personal authentication.
The paper clarifies that for the purposes of this research, it has considered more generally as a set of self-manifesting displays of the self, depending on the needs, interests and individual characteristics of a particular person.
Novelty. The author argued that the following criteria should be taken into account when forming a typology of a person’s social roles within the virtual screen space: the purpose that the person pursues; one’s own assessment of self, one’s capabilities and achievements; those forms of interpersonal interaction that one chooses over the Internet.