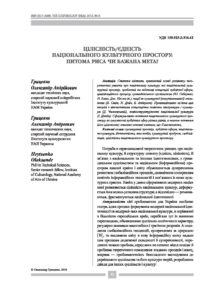 The article proposes a critical overview of the development of theoretical conceptualization of national culture and national cultural space, based on the concepts of public sphere, civil society, the civilizing process (J. Habermas, J. Kean, N.Elias and others), on theories of nation as a cultural/communicative community (A. Smith, K. Deutsch, B. Anderson and others) which suggest that a nation is a communicative group characterized by unity of its culture as a system of several building blocks (such as language, literature and arts, rites and beliefs, as well as national social, political, economic, cultural institutions) which are supposed to be complimentary. Where such complimentarity (or integrity of sorts) is not achieved, nations tend to fall apart.