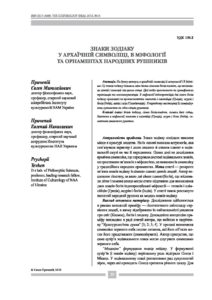 The zodiac zone is a narrow strip of the star sky, in which seven classical planets (from Mercury up to Saturn), including the Sun an d the Moon, carry out their cycles. In formation of 13 signs of the Zodiac that appeared in archaic symbolics, the main role belonged to the Sun and the Moon.